I thought I might share another photo from a trip to the Great Smoky Mountain National Park, with the heat of summer thoroughly in place I thought a pic of a cool spring Maidenhair fern might cool us down a bit !!

These ferns are really great to photograph, they have a neat circular shape and a very delicate structure to them, almost like something out of a fairy tale. Photographing ferns and wildflowers in the Smokys is always a great experience and the varieties are so diverse you could spend a month working just one subject. With the weather the way it is now I wish I could step back in time to recapture those wonderful monets in the mountains.

/ˌædiˈæntəm/),[1] the maidenhair ferns, is a genus of about 200 species of ferns in the Vittarioideae subfamily of the family Pteridaceae,[2] though some researchers place it in its own family, Adiantaceae. The genus name comes from Greek, meaning “not wetting”, referring to the fronds‘ ability to shed water without becoming wet.

They are distinctive in appearance, with dark, often black stipes and rachises, and bright green, often delicately-cut leaf tissue. The sori are borne submarginally, and are covered by reflexed flaps of leaf tissue which resemble indusia. Dimorphism between sterile and fertile fronds is generally subtle.

The highest species diversity is in the Andes in South America. Fairly high diversity also occurs in eastern Asia, with nearly 40 species in China.

Species native to North America include A. pedatum (Five-fingered Fern) and the closely related A. aleuticum, which are distinctive in having a bifurcating frond that radiates pinnae on one side only. A. capillus-veneris (Venus-hair fern) has a native distribution that extends into the eastern continent. A. jordanii (California Maidenhair) is native to the west coast.

There is a rich Adiantum flora in New Zealand with 3 endemic species (A. cunninghamii, A. viridescens and A. fulvum) in a total of 10 recorded species. Many of these are common especially in the west and south of the islands.

It is now known that this genus is paraphyletic, and that the vittarioid ferns are derived from this larger paraphyletic genus. However, if A. raddianum, and possibly a few other species, are removed, the remaining plants (genus type: Adiantum capillus-veneris) is then monophyletic.

Many species are grown in the horticultural trade, including all three of the species mentioned, as well as a number of tropical species, including A. raddianum and A. peruvianum. Both A. pedatum and A. aleuticum are hardy to zone 3, and are by far the most cold-hardy members of the genus. A. venustum is also cold-hardy to zone 5. A. capillus-veneris is hardy to zone 7.

Thanks for stopping by and taking a look !! 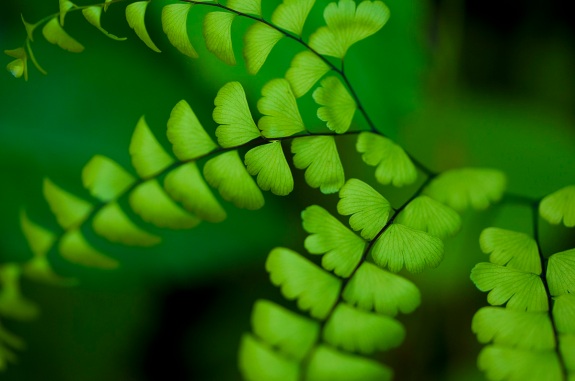