Skip to content
In early June I was able to attend an event I have been hoping to see for quite some time, and that is the Synchronous Fireflies of the Great Smoky Mountains. Synchronous fireflies (Photinus carolinus) are one of at least 19 species of fireflies that live in the Great Smoky Mountains National Park. They are the only species in America whose individuals can synchronize their flashing light patterns.
Fireflies (also called lightning bugs) are beetles. They take from one to two years to mature from larvae, but will live as adults for only about 21 days. While in the larval stage, the insects feed on snails and smaller insects. Once they transform into their adult form, they do not eat.

Their light patterns are part of their mating display. Each species of firefly has a characteristic flash pattern that helps its male and female individuals recognize each other.  Most species produce a greenish-yellow light; one species has a bluish light.  The males fly and flash and the usually stationary females respond with a flash. Peak flashing for synchronous fireflies in the park is normally within a two-week period in late May to mid-June.

No one is sure why the fireflies flash synchronously. Competition between males may be one reason: they all want to be the first to flash. Or perhaps if the males all flash together they have a better chance of being noticed, and the females can make better comparisons.

The fireflies do not always flash in unison. They may flash in waves across hillsides, and at other times will flash randomly. Synchrony occurs in short bursts that end with abrupt periods of darkness.

Here is a pic from the Firefly Event,  the pic doesn’t do it justice. This is truly an event that must be witnessed, even after a few days I still couldn’t convey the words on exactly what happened !!

The lights from the fireflies moved in waves up and down Elkmont Valley where we positioned ourselves, the pattern seemed to start far from us and be in strips of thousands of lights and would then stream across the bottom right toward us and then stop at our feet.

Then continuing on across the road at our backs towards the other side of the valley floor. There would be burst of 5 flashes quickly then it would stop for 10 seconds or so and then repeat in an almost frenzied fashion !!

The human reaction was incredible, when we first arrived hundreds of people were packed along the old roadbed that runs along the valley floor, many with lawn chairs and blankets making you think you were attending a fireworks show.

At first as the light faded you could feel the crowd growing impatient, people were laughing and talking and when one little firefly would appear they would remark is that it…I even began to wonder myself !!

The Park Rangers assured us to be patient and wait for the show, When it started the crowd was amazing, people at fireworks display usually oh and ah thru the whole event, but here there was an incredible silence as if the fear of your voice would scare them off and they would stop the beautiful display they were sharing with us.

Many in the crowd were brought to tears, including my wife, they were overwhelmed with such joy and amazement that the emotion displayed was almost as cool as the fireflies !!

Ok after this way too long post here is the pic, like I said before they are not that good and they don’t really represent what I witnessed but it is something I will have forever to help me remember that warm wonderful summer evening !!

Here are a few more images from another great trail in the Great Smoky Mountains National Park. Porter’s Creek might be my favorite trail for wildflowers and that’s because of one small little flower and that’s the White Fringed Phacelia, or should I say millions of them !!

Walking this trail starts out with a nice gentle trail that has many of the different flowers that grace the park, but after traveling up the trail for a mile you cross over a very entertaining log bridge and then walk into a different world. All across the floor of the gorge and up the side of the mountain are millions upon millions of these little flowers, it actually looks like you had just experienced a snow fall.

It seems like it is right out of the Lord of the Rings or some other fantasy movie, it is one of the most beautiful sights I have ever seen.  The actual bloom is about the size of a nickel which isn’t the largest broom out there, but when you have several million growing together it makes for an incredible sight to witness.

If you ever get a chance to travel to the park in the spring this another one of those great hikes you will be glad you took. So here are a few shots from the hike, I included a macro version of one the plants and then some of the actual trail itself, thanks for stopping by and taking a look !! 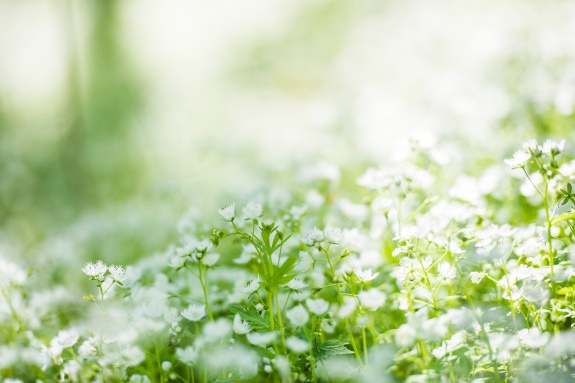 I thought it might be time to move on from the wildflowers we have here in Madison Indiana and venture on to my favorite spot to photograph and that’s the The Great Smoky Mountains National Park in East Tennessee.  If I could only have one place to photograph at for the rest of my life it would be here, the diversity of flora and fauna and not to mention the incredible landscape opportunities make the GSMNP  a photographers dream.

This past April we made a trip down to hike and work all the great spots for wildflower images. Even though wildflowers cover nearly the entire park there are spots where if you make the trip you have to visit and these include Cove Hardwood Nature Trail, White-oak Sinks, Chimney’s Top, Porters Creek and Cucumber Gap. These are all fantastic trails to view and photograph wildflowers and they are also relatively easy hikes as well !!

I won’t share many images from each trail but I thought I might just share a few today and post more later. First we have some shots from Cove Hardwood Nature trail. I hope you enjoy the images and if you ever travel to the Park in the spring these trails are a must see on your visit !!

Collinsia parviflora is a species of flowering plant in the Plantaginaceae known by the common names maiden blue eyed Mary and small-flowered collinsia. This tiny wildflower is a common plant throughout much of western and northern North America, where it grows in moist, shady mountain forests. This is an annual plant with a spindly reddish stem and narrow lance-shaped green leaves with edges that curl under. The minuscule flowers grow singly or in loose clusters of several. Each flower has five lobes, the lower deep blue to purple and the upper white. The whole corolla is only a few millimeters across.

I  find Clifty Falls State Park is a favorite place to find them in mass colonies along the bottom part of trail 8 leading down onto the gorge, this specimen  grows along rocky stream beds and along old road beds as well.

They are just another one of the great wildflowers that grow here and are a fantastic subject to capture, hope you enjoy the pics and thanks for taking a look !!

Once again great weather followed by cold and possible snow flurries, I don’t know what I did but it sure must have been bad lol !! So I will just keep reviewing images from past wildflower seasons and hope that it breaks soon before I break something here around the house.

This is a Catesby’s Trillium from last year at the Great Smoky Mountain National Park, I photographed this species of Trillium on the White Oak Sink trail on of the best wildflower trails in the park.

Trillium catesbaei, also known as bashful wakerobin or rosy wake-robin, is a spring flowering perennial plant found in the southeastern United States. Like most trilliums, it prefers moist, humus-rich soil in shade. Its northern limit includes the Great Smoky Mountains and other parts of North Carolina and Tennessee. Most of its populations are in the Piedmont from North Carolina to Alabama, under deciduous trees such as American beech, various oak and hickory species, and tulip poplar. Its southernmost natural occurrence is in Early County, Georgia.

The weather down in the mountains looks a little bit better than up here so hopefully I might slip down and photograph a few of these beautifies real soon. Thanks for stopping by and taking a look at my photography !!